PLAYING AGAINST A TEAM OF WOMEN….. 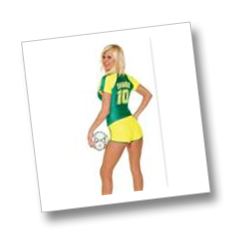 Frank Rizzo was one of my favourite floor covering retailers: only a short time in business and already he owned three retail shops and also had a commercial team working on large building projects, installing floors in shopping centres, hospitals and in doing so had established himself as an outstanding flooring contractor.

But, above all, he was a great communicator and we often chatted lengthily about other subjects than our business. This time, it was no different.

‘Peter!’ His recognisable voice came over my hands-free car phone. ‘I’ll come straight to the point because I have some customers waiting here. Would you like to play soccer with a team of retailers? It is in a month’s time, on a Sunday, and I am still working out the details…..’

‘Oh, hello Frank!’ It was typical that I was still in greeting mode while he was already in the middle of the topic. ‘Did you say soccer?’

‘I would like to join such a team, Frank. Who else would be there – I mean any other reps?’

‘No, Peter. It is a team of retailers and you would be the only supplier there!’

That was an honour indeed! Whilst Frank has organised his competitors into the team, I would be without any business rivals there and the PR value of this would be great. Retailers would smile at me as soon as I entered their shop instead of their usual stare that says ‘oh, another rep!’

This was an exiting opportunity, but I adopted a calm voice: ’Count me in, Frank….and thank you for thinking of me.’

‘That’s all right, Peter. I figure if you are as good a player as you are a salesman, we can only win. Ha, ha.’

‘Whom are we playing? I hope it’s not a professional soccer team!’ A situation of fiasco quickly flashed through my mind.

‘Yes, women. A team of female soccer players. And the referee will be a well-known sports person, he’s always on television. I can’t tell you more as I am still organising everything….’

‘ A team of women?’ I was lagging behind his conversation.

‘I can’t play against a team of women!’

‘What’s the difference? Besides, we will win easily, have a lot of fun and a celebration after. All in all, it will be a match with a difference and certainly

great entertainment!’ Thus was the persuasive powers of a successful retail salesman!

His final words were: ’Have to go now! Great to have you in our team…talk to you later!’ ‘Click’ and he was gone, leaving me sitting in my car with great trepidation. I had never played against a team of women. What were the rules in such a case? I mean women were so gentle and sensitive and I would want to remain courteous and chivalrous.

But, how would I tackle them? I certainly could not touch them as I do not want to cause a misunderstanding.

In my irrational mind I saw myself saying to such a delicate player: ‘After you..’ and letting her have the ball. However, the more robust person in me told me not to be an idiot. But what were the rules here?

Declan had been most generous when he allowed me to purchase, with company money, a pair of football boots. ‘You cannot play in some old stinking boots – out of the question!’ was his comment.

The shorts were to be black with dark blue knee-high socks and a white singlet. But our football skills were the great unknown factor and we convinced each other that we were only playing against girls.

The day of the game arrived. It was a warm Sunday morning and on the sports ground we players met with the referee, Anthony Sedwick, a well known sportsperson I had often seen on television, commenting on matches and long distance running.

‘This will be great, Peter!’ Frank was rubbing his hands with glee, looking at the sunny sky.

A wag behind me rasped in the thickest gangster slang: ‘Where are the broads?’ Spinning around I discovered Ben Halloran, another retailer from the western suburbs. He was in stark contrast to his voice, being a smallish, rather thin person, a devout father and would not dare to joke like that in his shop were his wife is around.

A group of spectators had also arrived – where were they coming from? They cheerfully sat down on the benches and chatted amongst themselves with an air of excitement.

Then the opposing team arrived in a small bus. Looking neither left nor right, they headed straight to their changing room and reappeared soon after in their neat football team colours.

They were professional-looking in their bright yellow blouses, white shorts and yellow knee-high socks. Their boots were of the highest quality, the type only experts would buy. The hair styles were either short or straight back, ending with a pony tail. Their attractive faces were without make-up, showing no emotions; they only nodded to each other sometimes knowingly.

Without a word, they lined up on the field and the referee took charge, explaining quickly the rules, mainly for our benefit. We took positions and Anthony blew the whistle after a quick glance at his watch.

The match began rather tamely, with a quick kicking of the ball, back and forth as if trying out our legs. After which one of the girls interfered by claiming ownership over it. Racing towards our goal, my position as a defender became active.

There was a young lady with me all the time and she was about my size and very sturdy looking. Her face was smooth and comely even without the application of any cosmetics; she had ruddy cheeks and looked more like a farm hand than somebody from the city. She gave me a quick glance, up and down for instant assessment, nodded, blinked and stored a picture of me away in her mind.

Her hair was short and blond, well brushed back and she had this self-assured calmness about her that started to worry me somehow.

And there was the opposition coming with the ball!

Rushing forward to block the ball, my opponent crashed into me, knocking me to the ground with a force that made me gasp for breath. What had just happened? I had only tried to take the ball off a young lady without hurting her.

Recovering, I regained my feelings of superiority and the next time the ball came near me I went for it. So did my shadow from the opposition. I was just about to kick a pass towards my striker when I was tackled in a most severe manner. First, I felt as if I had been hit by a potato sack, then there was a whack against my shins and I found myself on the ground again.

A whistle blew and our team was given a free kick but somehow, this was easily converted into a goal against us!

I can only report that the game got rougher from then on. Never had I been so bumped into, trampled on and crashed to the ground. Oh, and a few elbow blows to my rib cage made me wheeze like a concertina.

What happened to our superiority? I glanced at my counterpart and she seemed as calm as ever, except one strand of hair had come loose and hung over her forehead. Every now and then she blew it aside. Her knowing eyes followed the ball and she kept re-positioning herself, but always covering me carefully at the same time.

Then the ball came from high in the sky towards me, meant for my enemy, of course. But this time I was determined to gain possession of it, no matter what!

As it came down from outer space, I jumped high into the air to head it off to an expectantly waiting team member in a forward position.

But I had forgotten that this was a leather ball and heavy like lead. Heading it off all right and into the correct direction, there was this blinding flash with a loud ‘crack’ and suddenly the biggest headache I had ever experienced made me stagger around the field, with my eyes closed, teeth gritted and in a daze. Did my head meet with a cannon ball? What was this object? Noticing me wobbling around, the referee sent me off the field. Somehow, I eventually reached a bench and the pain in my head went on a rampage.

The rest of the game was a debacle, we lost the match by God knows how many points! My friend Frank first tried to play rough, bumping happily into his attractive opponent but she hardly noticed. Running him down and hitting him on his shins a few times took his breath away and his self-confident posture gave way to an expression of first disbelief, followed by despair.

When it was all over, we had a dejected gathering in our dressing room. It was a quiet meeting as nobody had any words for what had just happened.

Finally, Frank looked up at me: ‘How could this happen, Peter? Imagine! A team of girls!’

‘I don’t know, Frank! But you’ve done your best – you played as unfair as you could!’ 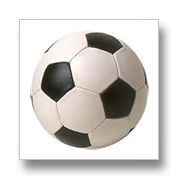